Solo show has opened at Belfast Exposed and will run until the 23rd of December 2022. For more information click here

Dialogue (2021) has been selected for this years 28th CUFF International Underground Film Festival in Chicago, USA 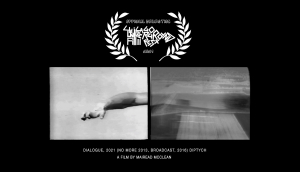 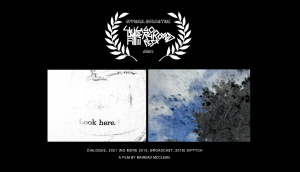 Dialogue (No More, 2013/Broadcast, 2016) Diptych, 2021 is about the period of my father’s internment in Long Kesh Prison in Northern Ireland 1971-72. The new film emerges from my earlier films No More (2013) and Broadcast (2016), where events at that time are seen through archive news footage and personal, family memorabilia.

I wanted to make Broadcast (2016) long before I made No More (2013). I had been looking for the film footage of my family from the early 1990’s onwards but couldn’t find it. I remembered the American cameramen being in our house in 1972, walking with us to school while filming my brothers, sisters and I but we had no contact with them after they left our house in Beragh, Co Tyrone that day in March 1972. No More won the MAC International Art Prize in 2014, and I thought I would try again to find that old footage. In 2016, I located a note in the online database of the Vanderbilt Television News Archive based in Nashville, USA that there was an interview with my mother. What existed was the recorded news item as it went out that day on the ABC news channel, not the original raw filmed footage. It had already been cut into a 3 min news story segment for a US audience.

Dialogue (2021) brings these two films together to fill in the missing pieces of the jigsaw puzzle, 50 years after my mother give the interview and two years after my father passed away.

Selected as one of five artists-in-residence, working with Beyond 2022 Archive Team under the Decade of Centenaries 2012-2023 Programme, Ireland.

“The Decade of Centenaries artist in residence scheme is an exciting opportunity for Beyond 2022 to re-imagine Ireland’s deep history with the benefit of a creative gaze. We look forward to welcoming Mairéád and working together with the Trinity Long Room Hub to explore how our national archival tragedy a century ago can inspire creative arts practice to engage new audiences today.“ 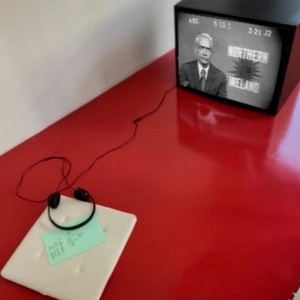 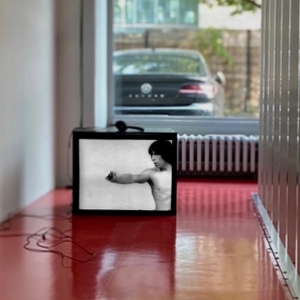 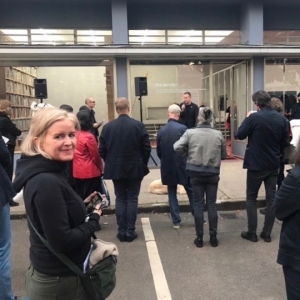 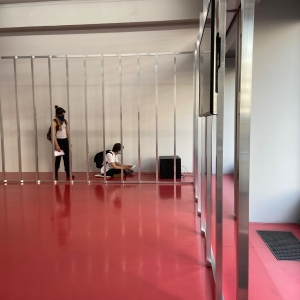 Making Her Mark (2018) | International Showcase Online| CUTLOG in association with the Society of Scottish Artists at the Open SSA + VAS, Edinburgh | Scotland

On the Personal Within Practice| Making Her Mark and A Line Was Drawn screened in a public programme as part Resonance: a series of new works commissioned by The Wapping Project, London. The project is a collaboration with Stal Gallery, Muscat and is generously supported by the British Council, DCMS and GREAT through the UK-Gulf exhibition programme. More information available here

A Line Was Drawn (2019) and No More (2013) to be screened at The Whitechapel with Anne Robinson’s Wakeful. Click here for ticket details

A Line Was Drawn to be screened at The Horse Hospital, London. Click the link for event details and tickets here

A Line was Drawn  screening @ the BFI London Film Festival on the 6th of October at the Southbank Centre, London. Click here for programme details.

In collaboration with IMMA, No More (2013) has been selected from their Collection and will be on show from the 4th of June until the 4th of September 2019 | Click here for more details.

Making Her Mark opens at Taigh Chearsabhagh Museum and Arts Centre, Lochmaddy, North Uist on the 3rd of August. Show runs until the 26th of October 2018

Preview of Making Her Mark at the next Kitchen Conversations, London, on the 17 May with the launch of the latest print publication from the Wapping Project, To Step Across the Line.

Selected for a new commission ‘ Making Her Mark’ with The Wapping Project/Women’s Playhouse Trust. Click here for more details

Selected through the Hennessy Art Fund for the National Collection at The Irish Museum of Modern Art, No More, 2014 will be on show from 13th of July until November 2017 at IMMA, in Dublin. Click here for more details

State of Mind | remix #4, 2005, Screening at the IFI, Dublin in, ‘Out of Body’, a selection of films, curated by Susan MacWilliam that explore the psychic and physical spaces of body and landscape. Automatic, subliminal and unconscious states of mind are explored through a variety of approaches in works from Jordan Baseman, Maya Deren, Mairéad McClean, Paul Sharits, John Smith and Susan MacWilliam. Click here for more information

No More selected f0r Visions in the Nunnery: “A renowned showcase of contemporary moving image and performance work, returning to the Nunnery Gallery, London for a special celebratory tenth”. Running from October 5th to the 18th of December 2016. Click here for more details.

No More at Sheffield Fringe in a programme entitled FILM AT THE INTERSECTION OF ART AND DOCUMENTARY. The fifth edition of Sheffield Fringe investigates ‘documentary’ film as an art object. It does so on the premise that thinking of and trading documentary as an object opens up the possibility of the ‘objectification’ of actuality. Screening June 11th. Click here for more details

A survey of McClean’s work will take place at this years Belfast Film Festival in April 2016. This illustrated conversation will feature a programme of early and more recent works spanning the period 1991 – 2016. Click here for event details.

No More will screen at Carnegie Mellon International Film Festival, Pittsburgh, USA. This years festival, entitled Faces of Conflict, takes place March 17 -April 3rd. Mairéad will be in attendance on the 21st of March for her screening and Q&A with artist, educator and fellow Northern Irelander John Carson. Click here for more details.

No More screens at The Whitechapel on the 19th of March in a programme entitled Easter Rising:Irish Artist’s Now. Curated by Gareth Evans, the day includes work by Desperate Optimists, Jennifer Walsh, Nick Stewart and Pat Collins. Click here for event details.

Movements Recollected (16mm/col/22mins/1999) has been selected for inclusion in the BFI’s Unlocking Film Heritage Project. It will be included in the Rural Collection which is their major curatorial theme launching in May 2016 and will be available for viewing through their website shortly after.

Migrant Women: Shared Experience will be showing at the Second Annual International Human Rights Lecture on Nov 29th 2015. The keynote speech will be delivered by Graça Machel, one of the world’s leading women’s rights activists who has campaigned tirelessly to champion equality for women and children. To book tickets for this event click here

No More is currently showing at The Stephen Lawrence Gallery, Greenwich London from Nov 6th to Dec 12th 2015. More details can be found here.

Moving Lives, is showing in an exhibition entitled From Home to Here, at the Linen Hall Library, Belfast, from the 1st of Oct to the 30 October 2015. For more details click here

No More is currently showing at the CCA Glasgow in the show ‘The Shock of Victory’ from October 19th to Nov 3rd. Click here for more details. Reviews of the show can be found here and here.

Migrant Women:Shared Experience, a collaborative film project made with contributions from 9 women living in the West of Ireland, is currently on show at the National Museum of Ireland-Country Life in Castlebar, Ireland. More details can be found here. From August 2015 to March 2016.

No More, is showing at the 15th Now & After, Video Art Festival, Moscow, Russia from April to June 2015, It was awarded and Honoury Jury Mention in the awards at the end of June.

No More is screening at The 5th Alchemy Video Art Festival, Hawick, Scotland on the 18th of April. For more details click here.

The International Peace Conference ‘Hope Beyond Hurt’ will be presenting No More at the Void Gallery in Derry, Northern Ireland from the 13th to the 17th of April 2015. Mairéad and her father PJ McClean will be in conversation with journalist Paul McFadden on Wednesday the 15th of April. Click here for details.